The Bugs Of Negativity 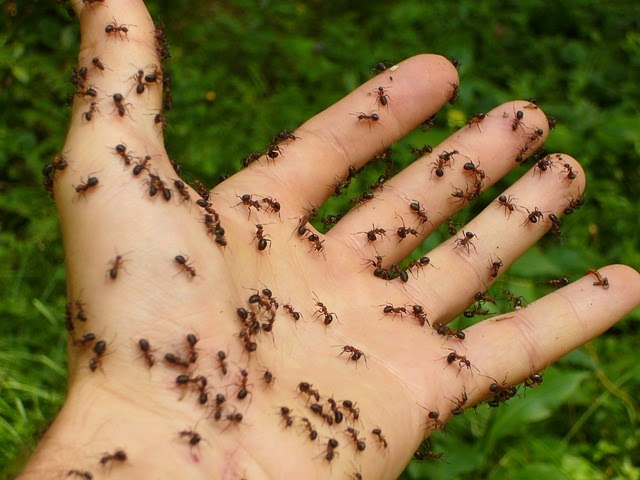 ‘Eeewww! What the hell! Get these bugs off my hand.’

Anything other that you felt looking at this picture?

Just in case you happen to be amongst the exceptional lot who don’t mind such a creepy sight, let’s be honest enough to confess – “For how long?”

Exactly!
Not even a day!

Why when we hate the idea of black ants clinging to our body for long, we so easily permit the real black bug of ‘negativity’ stick to us like it was always there, like our closest mate, like we were born with it!

It is time that we rub it off our mind and body. But the big question is ‘how’? Here’s the list of solutions that could help us get rid of it, coming to mind:

1)   Shout your lungs out for help
Really? Hahaha..!
All the help that you are likely to get is a roar of laughter from the nearby public who’d be finding your panic situation an entertainment promo of a reality TV show. Doesn’t work at all! While you’d be running with the ants of negative thoughts on your mind all around the market, it won’t be funny to rule out the option that the ants themselves are laughing back at your stupidity.

2)   Pray, the bugs run away.
Oh My God!!
The mighty merciful God will descend from Heaven above and stroke your hands with some feather of love, thus, healing the soft flesh of your tiny palms? Wake up my dear, for the Lord is as merciful to ants as He is to you. He’d rather smile and pray for you instead so that you may to get the wisdom back to deal with this ‘petty’ situation. God and prayers have better work to do than just dealing with your self-nurtured fanciful negative thoughts.

3)   Shake your hand for the ants to drop off
Getting to some action – Good Idea.
Getting to some panic action - Bad Idea.
While few weaker thoughts get dropped off, the strong become stronger and tend to cling to skin more fiercely. If you think you can take a break from the routine of life or go through a transforming or short term counseling session to get rid of negative thoughts, there are chances that the most threatening ones appear stronger once your action is over.

4)    Use the other hand to ward the ants off
Works! Only so far both the hands are ready to share the burden of beasts together.
While you use the right hand to throw the ants off from the left one, half of the beasts will land up on your right. So you again reverse the cycle and use your left until they get back to where it was. Oh, let’s not forget that few of the rapid moving thoughts may spread from your hands to the entire body and even to the dearest of your body parts. Basically what happened was that your whole body, like some metphysical synergy shared the burden and pain of your single hand and relaxed your nerves a bit. If this synergy continues, possibly you will get rid of your negative emotions completely. All you need to do is find out who in your life are your right hand, body and intimate parts ready to share your pain.

5)   Use soap and water, vinegar, salt or pepper to cut them off forever
Spot-on!
The common property in these items is their ability to break down the waxy layers of the pest’s exoskeleton, causing dehydration. Devoid of necessary ingredients they require to feed on, the black bugs will leave your body either dying off in the process or begin looking for some other vulnerable prey. The only way to get rid of negative thoughts and emotions is to stop playing a ‘sponge’ that attracts everything negative from nearby surroundings, absorbs the negative emotions and lets the thoughts stay there for ages. Take the responsibility of saying “NO!” You and you alone!  Of telling the bugs that “They will be washed off forever and I will not let you FEED ON ME anymore.”

6)   Put baking soda, powdered sugar, lemon, cornmeal, mint and lavender sachets near drains, in chests, closet, pantry etc. to repel ants
You’re a wise one!
Block their way for any future entry. Once gotten rid of, the next step is to repel these ugly white creeping beasts forever from your life. Use a barricade of defense in your life which the ants can never dare to cross. Draw a circle of positive people, helping hands, smart and wise individuals, good books, genuine friends and lots of love around you. Let all those who spread negativity, pull your mood down, underestimate your strength, annoy or even colour your mood stay out of the barricade. Don’t let these bugs enter your home. It isn’t difficult at all. The bugs know where to go. They will find their new life in some other weal vulnerable ‘sponge’ and spare you.

“Give yourself permission to immediately walk away
from anything that gives you bad vibes.
There is no need to explain or make sense of it.
Just trust the little inner voice that is telling you.”