What comes to mind like a film flash are vivid images of stone carved male and female deities, lost in passionate hunger for sex, striking various poses of love making and ready to take us under their esteemed tutelage.

"Then Almitra spoke again and said, 'And what of Marriage, master?'
And he answered saying:
You were born together, and together you shall be forevermore.
You shall be together when white wings of death scatter your days.
Aye, you shall be together even in the silent memory of God.
But let there be spaces in your togetherness,
And let the winds of the heavens dance between you." – Khalil Gibran

Khajuraho was a much awaited destination for us to visit and what better a day than our 10th wedding anniversary! So we packed our slimy luggage and boarded the train to Khajuraho to celebrate a decade of nuptial bliss and satisfy our greed to explore the places of historical and archeological significance.


It was six in the morning when our train gushed in at the famous Khajuraho’s  railway platform. We’d heard of the town as one of the most solicited tourist places in India which driveled our expectation to find a big crowd of people but lo and behold! To our amazement, only six passengers dropped at the platform which was nearly empty. As far as we could see was a blanket of fog and no one, not even a single stray dog around. For a moment I looked at my husband’s face and got a ditto zapped expression in return, ‘Did we drop down at the wrong place?’

Boarding an auto rickshaw we moved towards our stay arranged at a cottage booked from Madhya Pradesh Tourism. It was a cosy little private cottage away from the hustle bustle of main town, also pet to white rats, rabbits and peacocks.

Since it would not be the least possible to put in words what we experience of the splendor and vastness of Khajuraho, given below is points worth mentioning from the site remains.

Like the tiny nuances of the temple that took us by awe. Look at this map of a temple carved on the ground by artisans and the writing of architects which are still clearly legible. 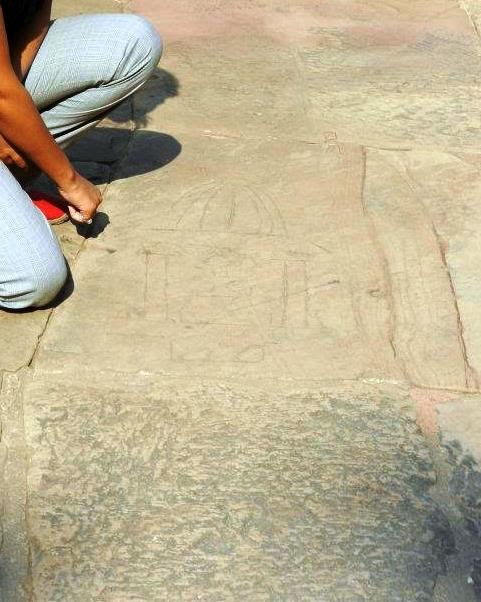 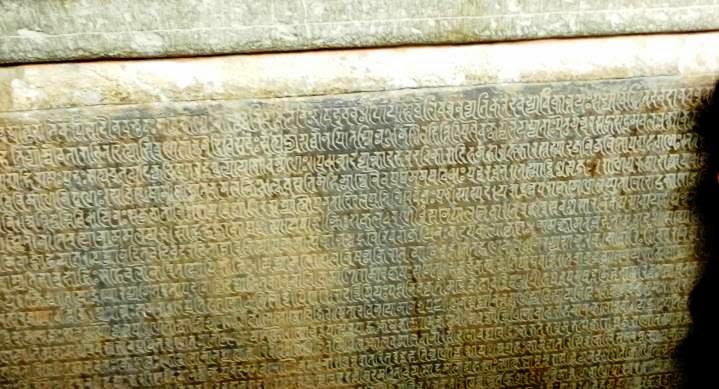 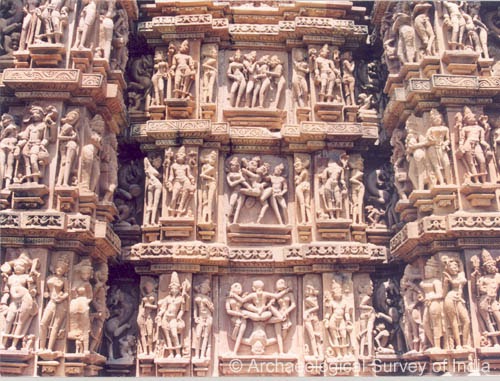 It makes us wonder why when a temple which was supposed to be a forbidden place for lustful thinking, been adorned like a book of sex-making on most of the walls. Was the Golden era too forward an era of thinkers? Was talking of sex within the premise of God and religion not a taboo then? Why was unnatural sex so endorsed? What was about ‘tantra vidya’ involvement in love making between kings and queens as in many places the role of a ‘tantrik’ and ‘yogini’ helping couples for the sexual acts prominently exposed.

This beautiful statue of Shakuntala is like some marvel of a rock. Here she’s shown taking out a thorn from her feet. One look at her expressions would make you feel the connect the sculpture must have made with the character at the time of rendering his job with a spindle. Another is one f in which she tries to arrange her dress after it  is disheveled by some love making act. 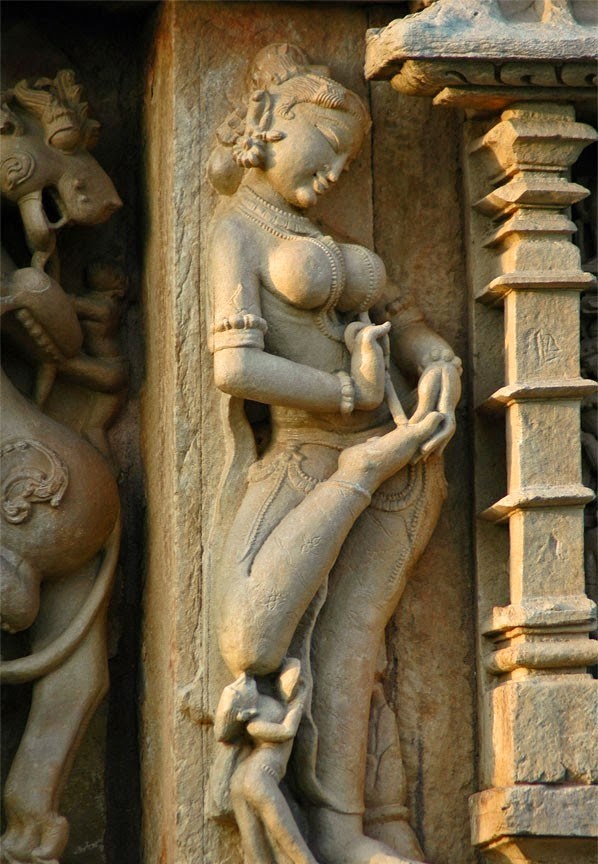 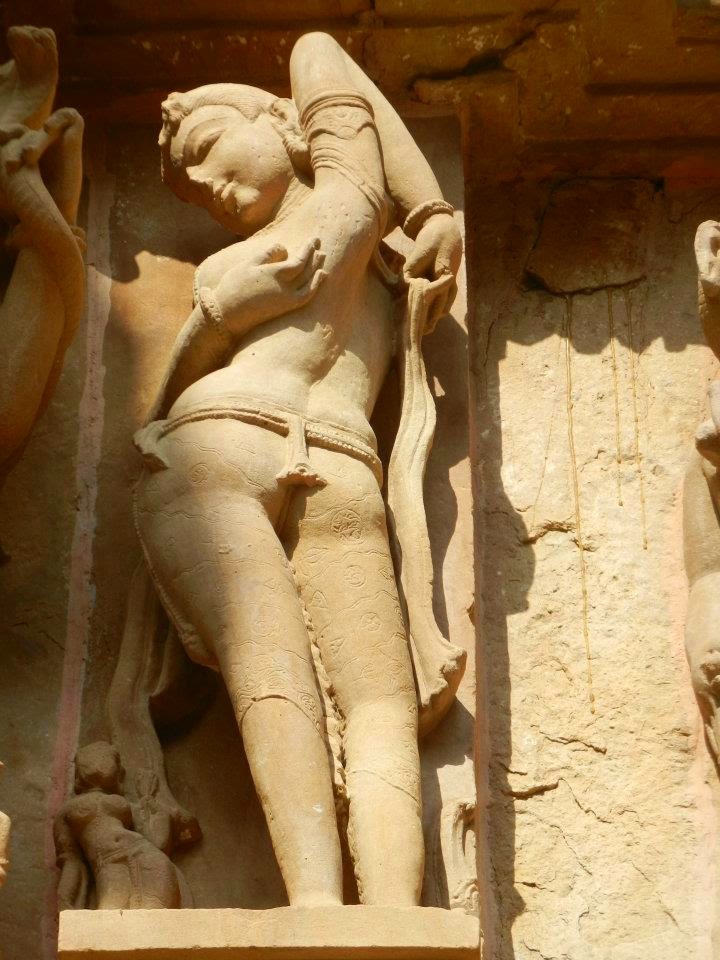 The beauty of Khajuraho sculptures lies in the endearing manner in which expressions of characters have been captured. For example, in the picture below this surasundari (beautiful lady) looks at her image in the mirror, finds a gray hair and sulks. Now who’d think of depicting such an emotion that on a temple wall!!! 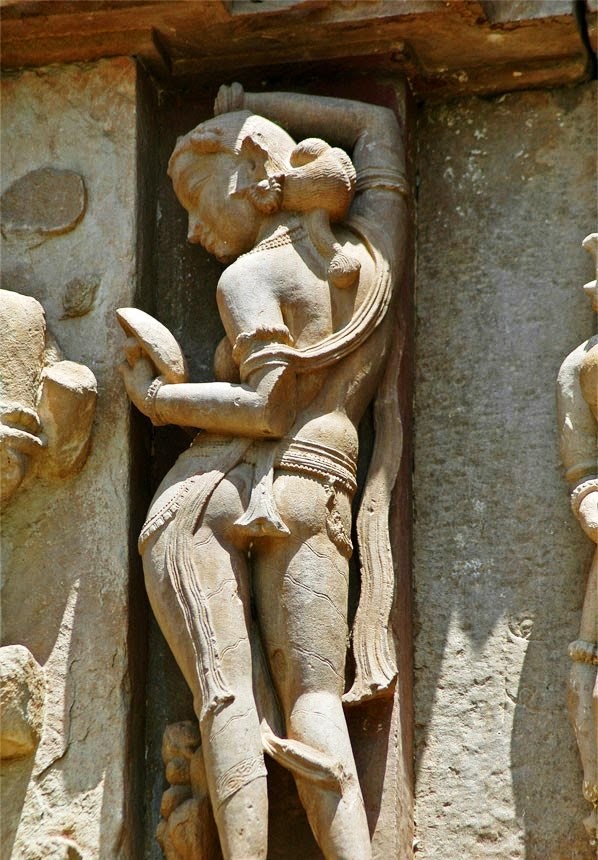 Here’s the sculpture of a Chandella queen putting surma (kohl) in her eyes. 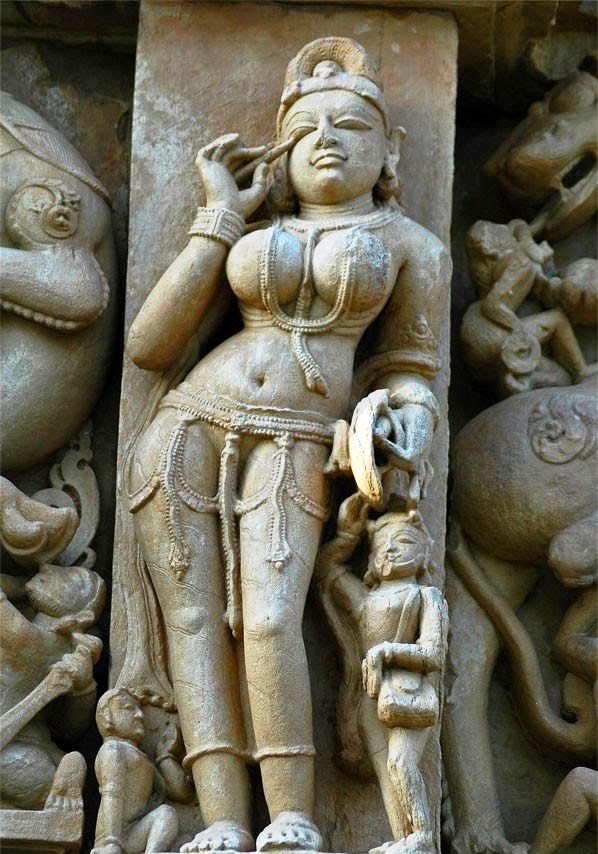 Statue of Varah is the heaviest piece of rock in the site, a colossal monolithic image of the boar incarnation of Vishnu. The sculpture is carved with 675 miniature figures in twelve neatly carved rows on its body.

On the open terrace of the temple lies an important sculpture of Shardula (a warrior and a lion), a favorite theme in Chandella time. 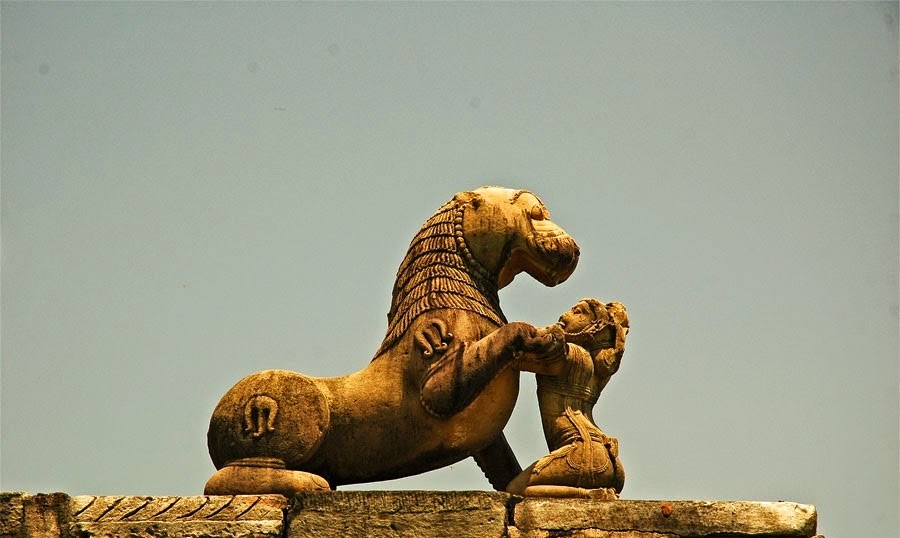 The Eastern temples are though lesser known but just as important because they reflect a very different side of Khajuraho. The Brahma Temple is actually dedicated to Vishnu. There is also a stark difference between this and the typical western group temples, devoid of the ornate carvings, sensuous sculptures and elaborate architectures. Instead, it is a simple structure and is made of granite along with a pyramidal spire made of sandstone.

Evenings at Khajuraho turns into some romantic fiesta. Street side restaurant begin to shine with folk decoration, fairy lights and candle-lit dinning spaces. Display of clay sculptures and paintings adorn the market. Not to be missed is the two hours cultural programme full of folk dances, martial arts and songs organized by Madhya Pradesh Tourism in the town’s only auditorium. 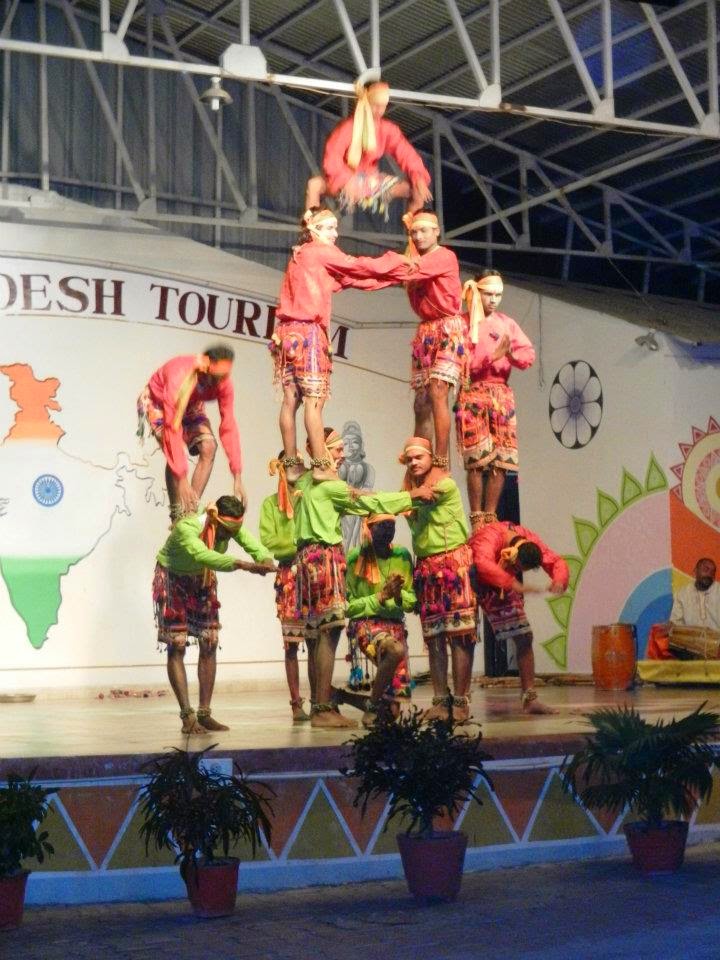 One of the most memorable and heartwarming trips that I took with my soulmate. Discussing, researching, wandering through the remains from the past, mesmerized by sculpture art and debating over lustful interpretation of love the trip was a complete rejuvenation. We winded out trip with a light and sound show in the voice of Mr. Amitabh Bachchan at the Kandariya Mahadev underneath the moonlit sky.

As the tale echoed in the remains of Khajuraho walls, it forced us to bow down before the architectural grace and say, “Long live creativity”.