When I set on my journey to explore the mystique of Rajasthan, I had a long list of places in mind. Jaipur, Udaipur, Jaisalmer, Jodhpur, Ajmer, Pushkar and the very many mighty forts around these places. To be honest, if at all Chittorgarh was to be in the itinerary, it wasn't to be given more than half a day, for it looked not even half as significant as other talked-of places did.

My husband and I reached the trekking point to Chittorgrah Fort in an early December morning. This is what it looked like from a distance - 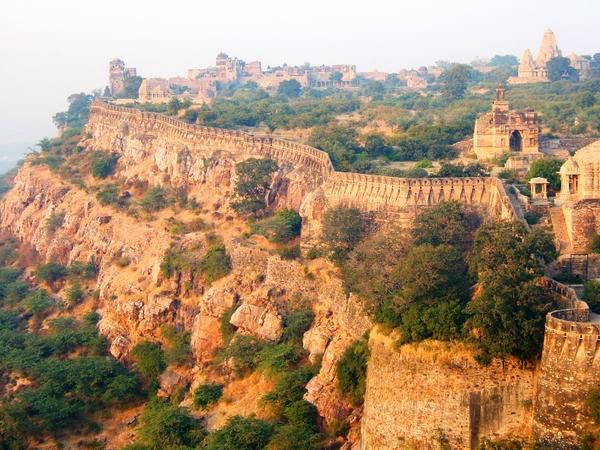 Mighty!! Super powerful!
As if having borne the cruelty of intruders and calamities of nature not once or twice but a hundred times. In fact, we were sort of right. As the history has to tell, Chittor Fort fought thirty major battles out of which it lost only three. With every major battle millions of lives, opulence, fame and prosperity were lost and with losing the last battle, Chittor never rose to glory again. The silence of ruins however speaks a thousand stories of chivalry, sacrifice and blood flowing like river down the fort hill. This wasn't just a holiday spot. From the many forts and palaces that we had been to, this one was ALIVE. Waiting to be told and retold and appreciated.

As we trekked the various points in the huge and mighty fort, we realized that half a day would not be good enough to see even half-the-fort. To be succinct, here are the few landmarks that had the most powerful storytelling:-

On one summer night in 16th century within these stone wall Panna, nanny to little prince Uday Singh II, had already fed her beloved son, Chandan and her royal charge, and put them both to bed when she heard loud noises and chaos from a kilometer away distance. Immediately, a servant ran in to tell her that Banbir, the illegitimate claimant to the throne, had assassinated Uday's father in a nearby chamber of the fort and was rushing to behead the little prince. "Young Udai must be saved", that was all Panna was determined about.  She immediately instructed the servant to put the sleeping prince into a large basket and smuggle him out of the fort where she would later join them and then the mother of strength and steel lifted her sleeping son, Chandan, from his bed and placed him on the prince's bed, faking him to pass off as the royal prince. As expected, Banbir burst into the room and slew her son right before her eyes. Watching her son cut to pieces, this woman rose motherhood to a level no commoner can.

Twelve years later, Uady Singh returned to throne as the King of Mewar.
The remains of the chamber move one to pride and tears. 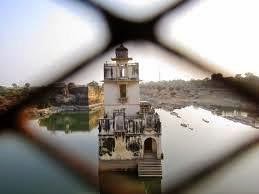 Rani Padmini is known to be one of the most beautiful women in the world whose grace and intelligence either brought suitors and claimants to insanity or to dust. She is the uncrowned heroine of Chittor, also one of the bravest woman in Indian history. This is the palace where Khilji caught a glimpse of Rani Padmini in a mirror while she sat on the steps of the Jal Palace. The nerd king instantly lost his mind completely to her beauty. This later led to first major attack on the fort by him which drove Rani to perform the first Jauhar in India, supposedly with 15000 women and children.

Jauhar! In which, on getting the news of their spouses getting killed in the battlefield, women in the fort along with their little ones were supposed to jump in a forty five feet trench of fire. It is said that one jauhar fire stayed lit for three continuous days after which the fort left nothing behind but a barren land of in-collectible ashes. 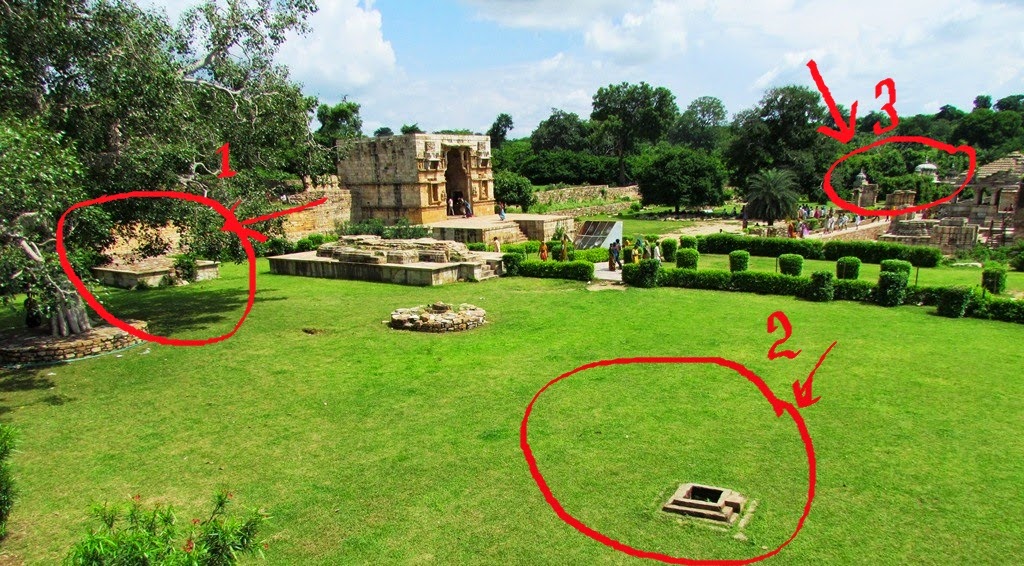 Gosh! This was the creepiest place in the fort, like some live burial ground. Sati, Jauhar, martyrdom, soldier's graves, cold blooded murders, talk of it and you find it here. The silent reverberations of children howling, women mourning and mothers weeping gives  goosebumps.
In the picture above:
Spot 1: The platform where women  performed 'Sati'  by immolating themselves along with husband's dead body
Spot 2: The spot where women and children performed Jauhar in a forty five feet deep trench
Spot 3: Burial ground of soldiers.

(3) Meera Temple
In 1516, Prince Bhoj of Mewar married the princess Meera of Merta. This is the same Meera Bai who is spoken about as the biggest devotee of Lord Krishna. The 'Kanwar Pada Palace' in palace is the place where Meera arrived as a new bride and lived at Chittorgarh Fort. Her love for Krishna was not appreciated by the royal Rajputs who mocked her to be loving someone who she wasn't married to and tortured her day in and day out. However, this did not dissuade Meera from worshiping Krishna. She got a temple built within the fort premise where she spent most of her time singing glories of him. 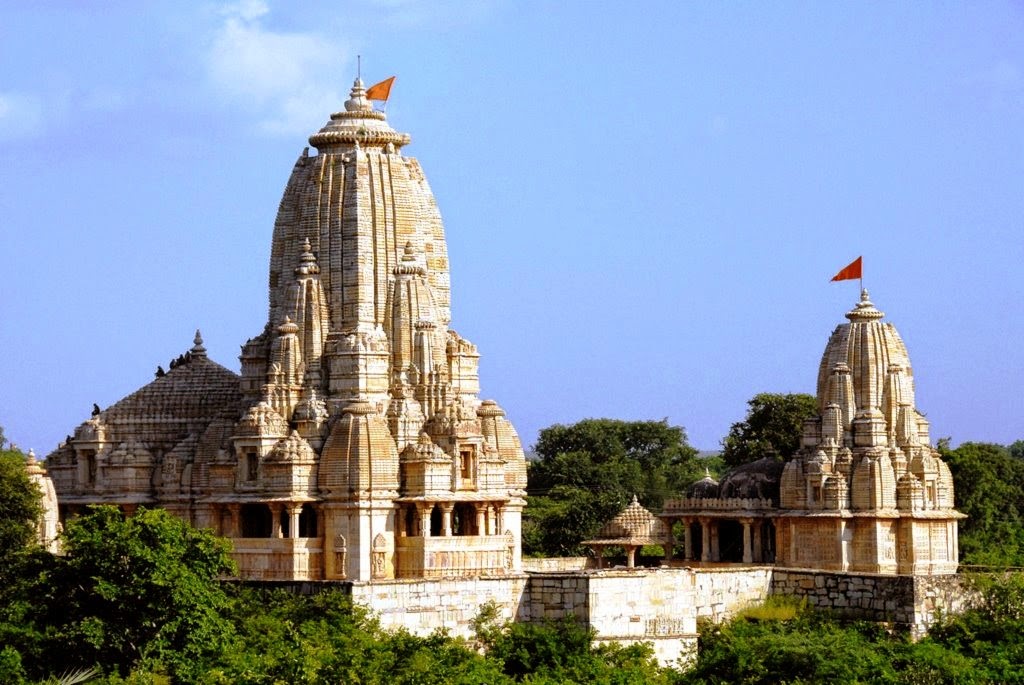 Around 1532, Meera Bai left Chittorgarh forever and moved to Vrindavan. The legend goes after that day, Chittor never ever saw good fortune.

(4) The Royal Pond
This is the pond in the fort where royal blood took their daily bath. While men could walk down to the pond in an open stairway, an underground tunnel was built for the royal ladies so that their privacy remained protected. The fort that once boasted of 84 water bodies has only 22 of them now. These water bodies are fed by natural catchment and rainfall and have a combined storage of 4 billion litres that could suffice water needs of an army of 50,000. The supply could last for four years. Because the fort would not run out of food or water for years, rarely did Chittor lose long fought battles. 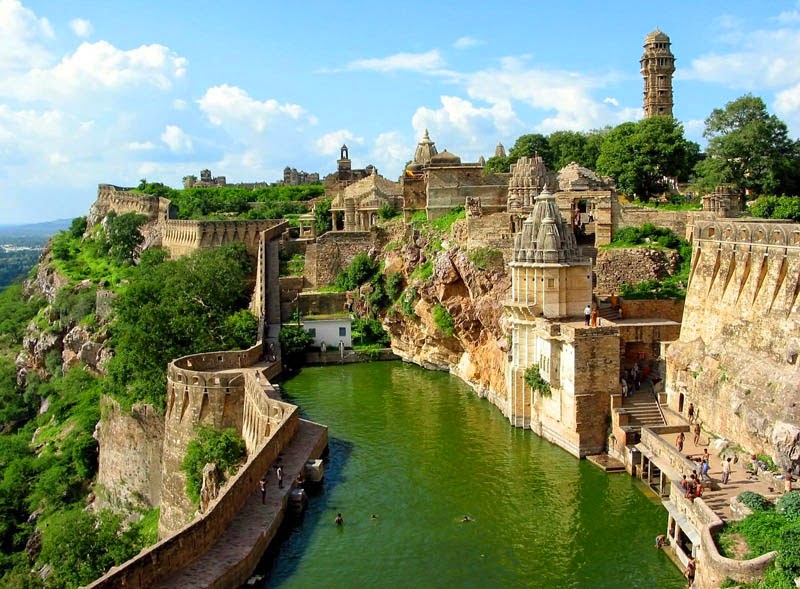 (5) Victory Tower and Kallika temple: These are another two notable spots in the fort premise. The Victory Tower (37.19 m high and 9 storied) was constructed by Mewar king Rana Kumbha between 1442 AD and 1449 AD to commemorate his victory over the combined armies of Mewar and Gujarat led by Mahmud Khilji and boasts of remarkable architecture. The Kallika mata temple is an ordinary ancient temple with a rare tradition in which whenever a wish is granted by Goddess Kali, a rooster is left free for life in the temple campus unlike the old age tradition of 'bali' or sacrifice at altar. One can see numerous roosters playing gleefully around with dogs, monkeys and birds. 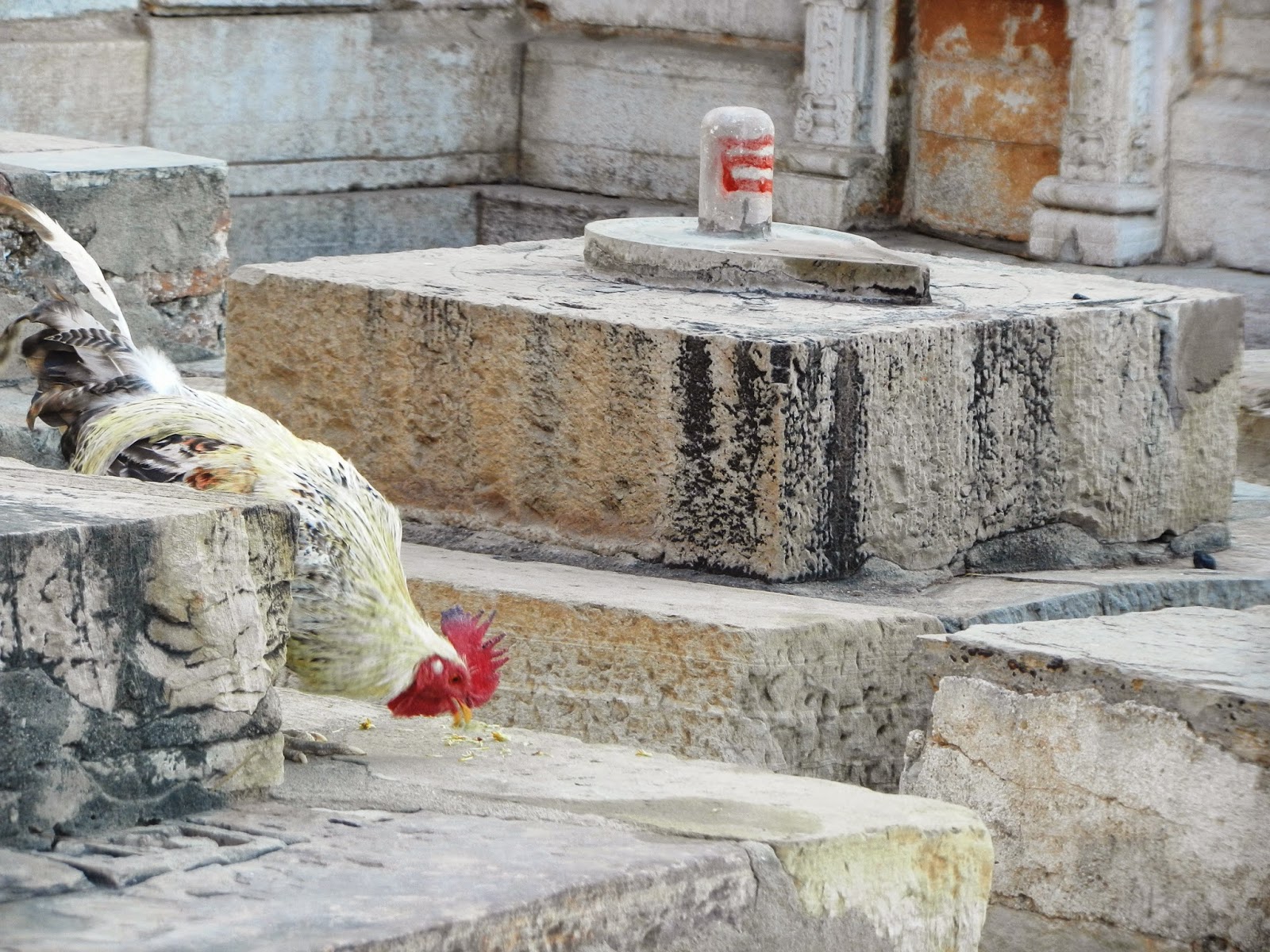 The best way to end the one-two days long trek of the Chittor Fort was with the sound and light show organised by RTDC within the fort premise. As the dusk falls and darkness seeps in, stone walls come to life with casting of beautiful lights. One can easily imagine the sumptuosity of life and bravery of Rajputanas with which they defended their prestige, year after year, enemies after enemies. This feeling is so profoundly moving that even after returning from the fort, it haunts in the memories for a long long time.
_________________________________________________________

Which part of the review caught your attention the most? Which site in the fort beckons you most for a visit? Do let know.