We are typical North Indians. Very used to hot summers, less waters, spicy food and speaking Hindi-English-Punjabi-Bengali-Gujarati-Bihari-anything but the Southern State languages. It was my sister who fell in love with a Malayali guy and married him. Did not even realize when in this entire process did the whole family, of elders, my daughters and a quondam maturing couple (My husband & I) also fell in love with a clan whose language sounded all-Greek, whose food was stark opposite of what we’d been having back home and whose land is a green-misty State full of rain, water and coastline. Love knows no boundaries. It just beckons like hell. A Malayali family of a newly acquired relative’s wedding called us back to Kerala and this time, we didn’t miss the chance to cover the misty hills of Munnar apart from the Arabian sea shores. Ah Kerala! Wish you were a stone’s throw away from our land.

This is a small piece from the Munnar memoirs.

Set at an altitude of 6000 ft in Idukki district of Kerala,  Munnar was the favored summer resort of the erstwhile British rulers in the colonial days and is now known for unending expanse of tea plantations - pristine valleys, water, Kannan Devan hills fully blossoming with exotic species of flora and fauna in its wild sanctuaries and forest, aroma of spice scent and mists that falls on your cheeks to rest in romance. Munnar, supposedly, has to have all of it. 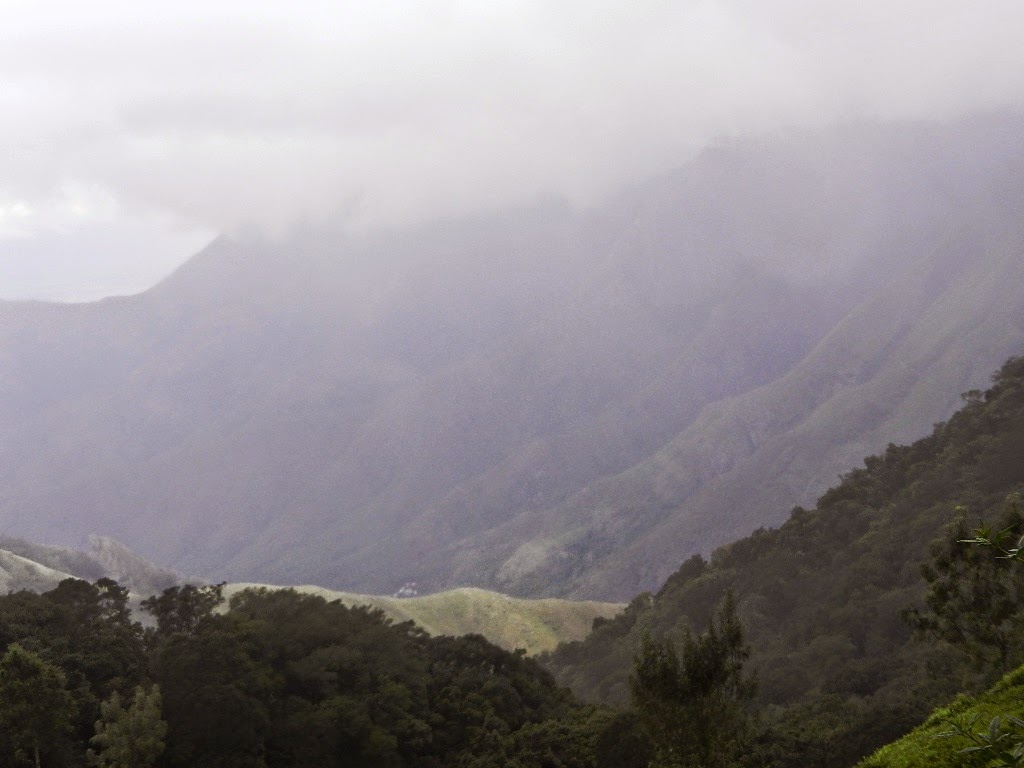 Beneath is a view of the Haripad railway station from where we boarded a passenger train to the nearest junction of Ernakulam from where we would get a taxi for the uphill climb. A strikingly clean platform, quite unlike the Northern Indian railways where dealing with filth and dirt have become a man’s daily habit. 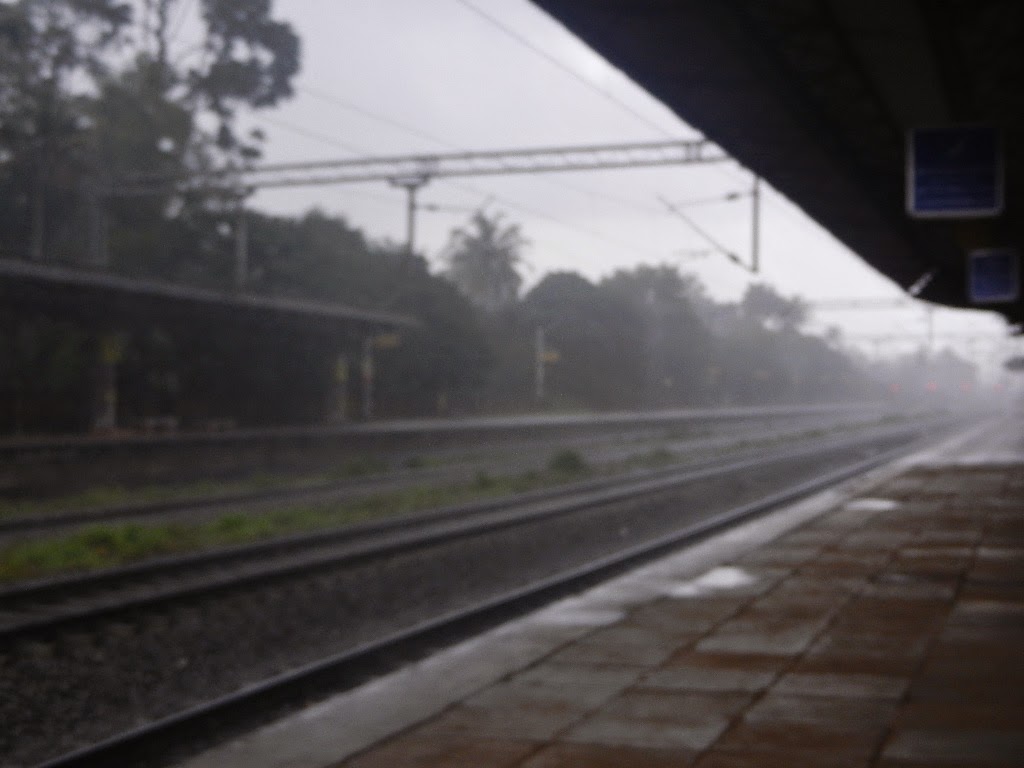 We began ascending the slope of Munnar at around four in the evening. While we meandered through the narrow roads, mist fell down blocking the driver’s view and the jungle around made creepy sounds fueling our appetite for adventure. By eleven in the night we were almost there. At 5000 ft. above the ground, near to our coy little resort, Aryanka, beside a huge waterfall. The invisible dark misty mountains had almost possessed us in its beauty by now. 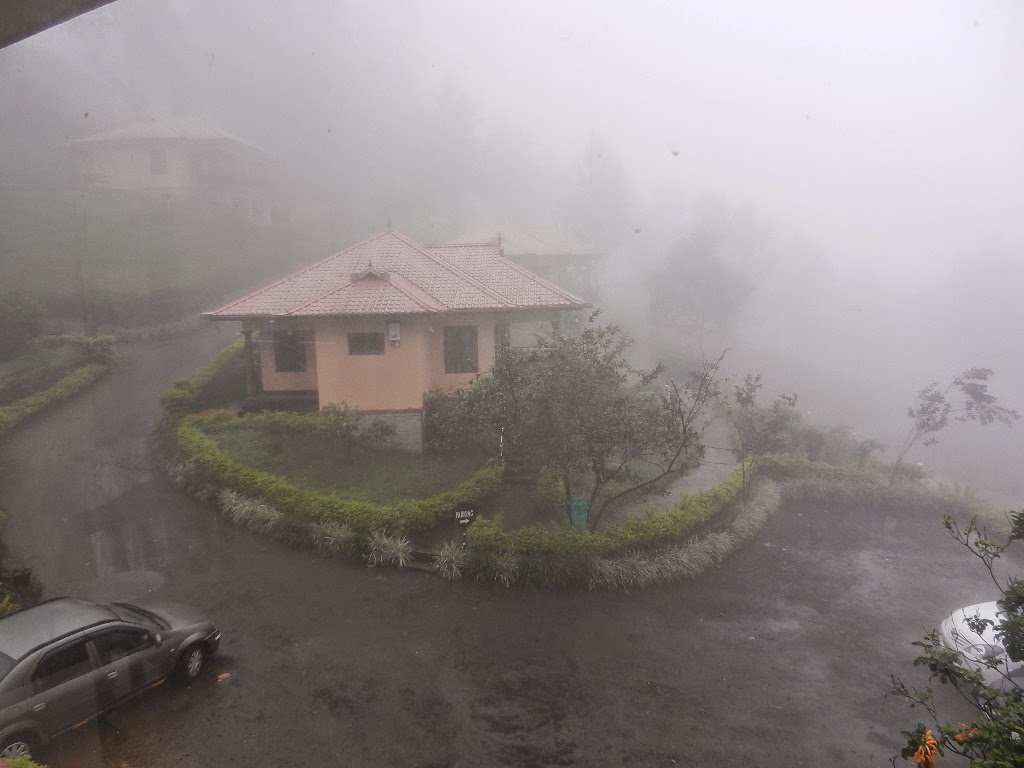 Early in the morning, we started our escapade to the mystique of tea plantations. You know why Munnar is so different from other hill stations? Because it is not as much about the nature’s upbringing as about the sweat, labour and toil put in by thousands of labourers over generations (since 1870s) who’d put in their energy and soul in creation of tea estates. Munnar is but an impeccable example of man and nature culminating into one another and making lives of each other beautiful.

En route to topmost point of Munnar, we spotted the Kundala lake, an idyllic place in Munnar located Surrounded by rolling hills and valleys of dense forests, Kundala is known for the Kundala Arch Dam or Sethuparvati Dam and Kundala Lake. This was surreal! Like the one from some Hollywood movie shot. You've to see it to believe it. 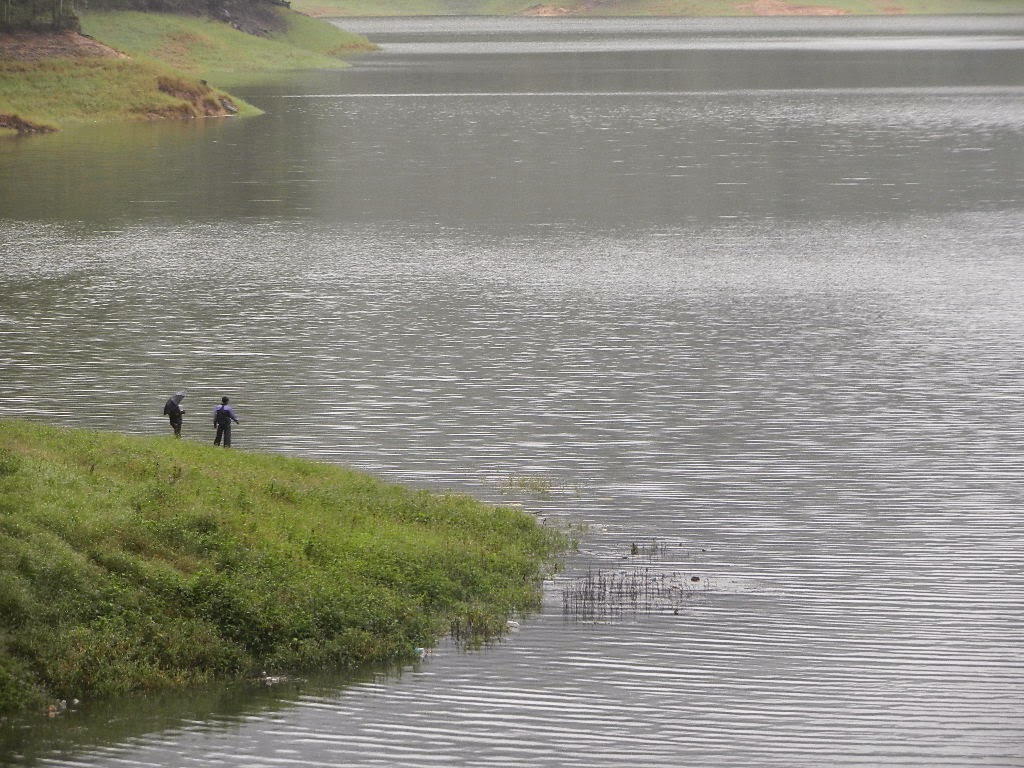 Further on the way was the world famous Echo Point, behind a scenic lake bank. The children had a gala time shouting their lungs out to hear the hills reverberate your sound back to you.

"As a child, I would sit and ponder,
at the wooded areas,
for their beauty relaxed me.
The sway of the branches and whistling of the winds,
as if they were calling my name.…" 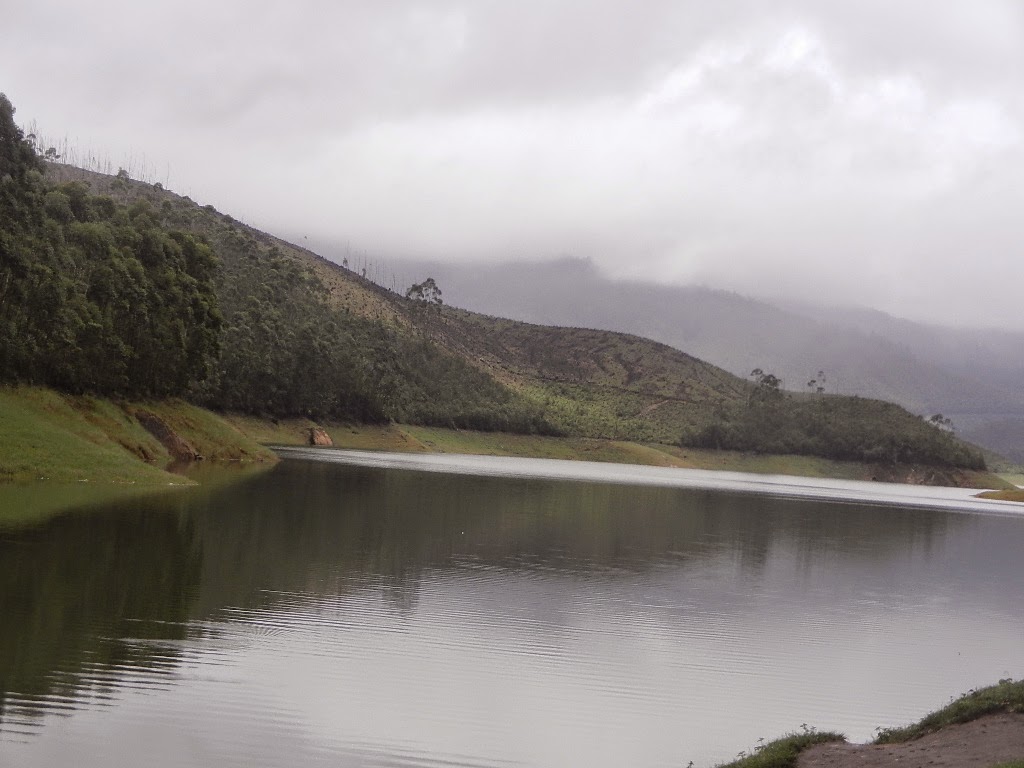 Mattupetty (the Cattle Village) is a small town which has become a popular picnic spot among tourists visiting Munnar. Mattupetty is located at an altitude of about 1700 m above sea level, at a distance of 13 km from Munnar.

After a day's hard work, we were almost there. At the Top Station, situated about 1700 m above sea level at about 41 km from town, on Munnar – Kodaikanal road and perhaps at one of the most scenic points of getting a breathtaking view of Munnar. 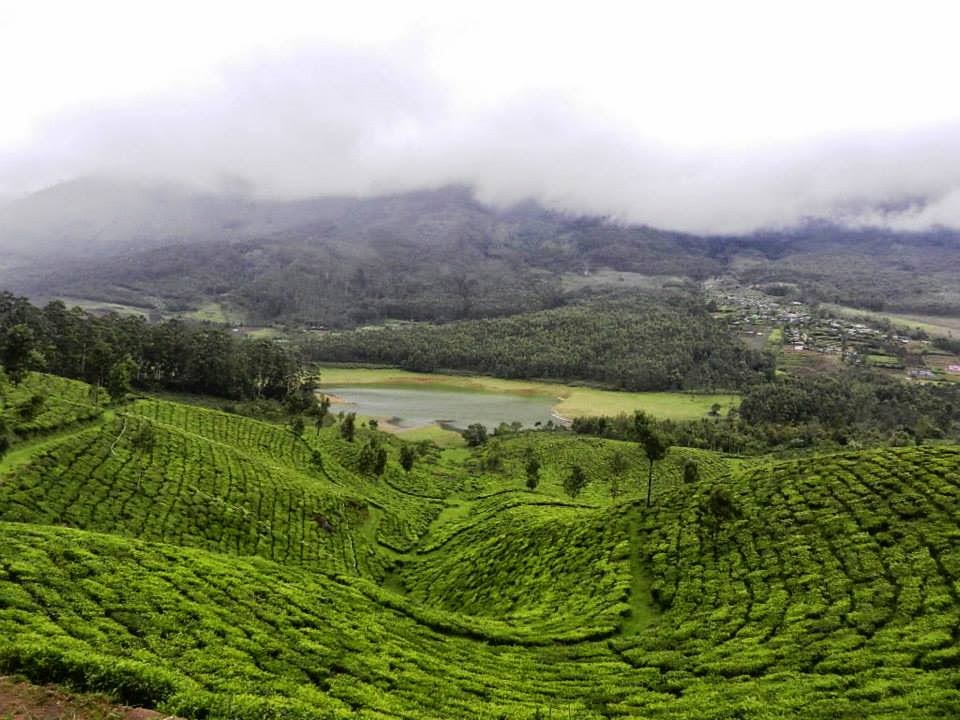 Standing somewhere tall in the vastness of plantation, underneath patches of torrential downpours are some soulful ladies. They take me awestruck with their determination, hard work and skill and I ask, “What’s it like to stand in rain for ten hours a day, work like machines, look out for leeches and still keep singing?” 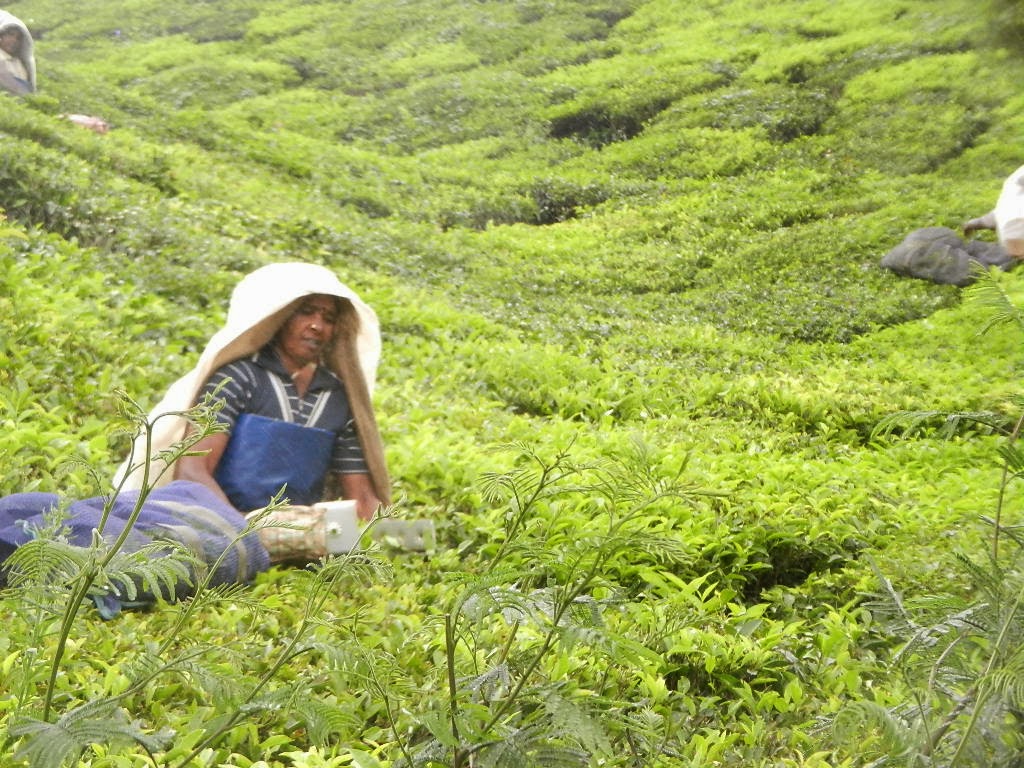 Owing to the conducive climate, resource and vegetation, the place is home to variety of rare and endemic species of animals. One can get a glimpse of it at Rajamalai National Park, Chinnar Wildlife Sanctuary, located in the rain shadow vegetation of Western Ghats and Thattekad Bird Sanctuary.

Finally, reached Pothamedu! Trekker’s paradise! Standing in the middle of all shades of green colour, brushing the skin with feathers of cool air and bidding the day a goodbye, the feeling is something like this -

"Have you seen the Sunset and Sunrise


And the Horizon that's a prize


How the colors mix and melt


And look as soft as felt…"

Munnar, my love, you keep beckoning!!!