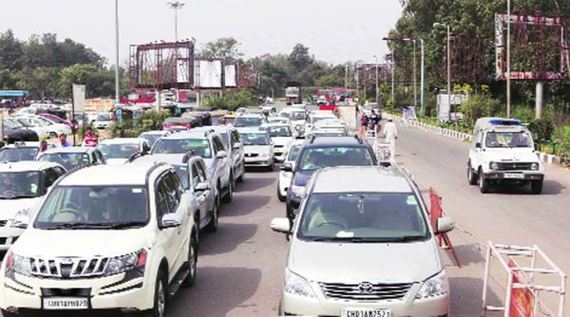 Recently when an elderly couple, one of who was a 67-year old differently-abled wheelchair patient, was denied entry to the VIP lounge at Udaipur airport without any justifiable reason, huge annoyance floated throughout the country. Many media giants including NDTV expressed their solidarity in raising a common voice for the common man against burgeoning misuse of VIP culture in India, who tend to forget that 'With great power, also comes great responsibility." The question, however, is this -
Who is a VIP?
Who is this new breed of species in India whose every second of life a precious holy water which must be protected even at the cost of public discomfort? Whose every glimpse a precious blessing for the common man who must stay stuck in traffic for long hours before the Majesty's convoy passes by? Who is this 'very important person', who when not even around, is reserved a special room in his commemoration, prohibited from use even by the most needy?
While we thought the country is divided into caste, creed, religion, colour or gender, here's an addition to its rich classification. The common versus the very important person! Depending on how the VIP is using tag bestowed, the 'I' in the word often gets replaced with impolite, idiot, imbecile or irritating. VIP is a species of its kind. One could be an admirable minister, a bureaucrat, a corporate bigwig or a media giant in professional life but the moment one steps in public domain, the VIP puts on a typical avatar so that he can be easily identified even in a crowd of millions.
How about taking a look at the characteristics of this peculiar species that India has bred since the time British left us obliging in their pious hands?
VIPs use divine vehicles. No! It's not a meta-airplane that descended from the clouds above for this special person but the same ordinary SUV, car or jeep that one spots in a local market's showroom or in any of our homes. What gives it a divine touch are the red, amber, blue beacons and flashlights donning its roof tops which whistles, glows and clears way for the red carpet on road. Just one 'touch of glow' on top of vehicle and suddenly one can see convoys adorning roads, barricades erected, cops running in action and public waiting like helpless mute spectators. If there's no beacon, a flag of some national or local political party serves the purpose as deftly. Coupled with intense honking and reckless driving, even their chauffeurs begin to think of themselves as no lesser a Supernova.
VIPs love their family like no other. Wife, children, close kins and distant relation or whoever? Our special person has amazing qualities of doting. While most of benefits and privileges are meant for effective official discharge of duties, the VIP magnanimously distributes all to his close ones. Office vehicles, special passes, reserved seats, bodyguards, tickets, tours and even an admission for children in colleges through backdoor special permissions? Not a big deal when instead of the VIP, Mrs. Minister or Mrs. Bureaucrat (who otherwise is Mrs. Nothing herself) cuts the ribbon at most inaugurations on his behalf.
VIPs believe in leading. Without an exception, these meritorious individuals lead us everywhere. They are the first ones to grab a seat in stadium, block a space in parking, book special passes to entertainment, seek appointment from doctor and sadly, may even claim entitlement to a prospective patient's bed in star-hospital, emergency or no-emergency. It could well be the reason why nobody has ever seen a VIP waiting for his turn in a public toilet like any of us?
VIPs love God or vice versa. Whatever be it, there are sufficient reasons for us to believe in the strong bond of affection between God and VIP. Right from the time they are offered special entry to religious places to overlooking worshipping queues to special darshans for their well-being and prosperity. At a scared place where everyone is presuming equal before the Almighty, our special one is anointed the blessed soul and savior of mankind by the very pujaris. who eagerly give them special attention.
Finally VIPs, like little children, love stickers. If you find it difficult to identify this species on the basis of characteristics discussed a while ago, feel free to spy their cars. There you go with the Eureka moment! Bharat Sarkar, Pradesh Sarkar, District Administration, let alone Judges, even advocates of Supreme/High or any petty court, flaunt stickers all over! And why not? Isn't bypassing rules no more than a silly child-play to some?
Strangely, nobody has a clue how 'genuine' the VIP is? He could actually be a person of national asset who deserves a special treatment or he could be just a funny muse making mockery of his post? Whatever specie he is, let's accept, it is we who help breed the VIP culture. How some of us brag around in our social circle about knowing some high profile VIP or having links with him? How some want to get even remotely associated with VIPs in order to receive smattering spillovers of their privileges? How few of us do not hesitate bowing before them to get favoured out-of-the-way recommendations, only to oblige later?
But lo and behold! After all, ours is a culture in which we believe in preserving our nation's rare wonderment even at the cost of our lives. We have been protecting old historical monuments, dolphins, Indian vulture, tigers and other rare species with much commitment, patience and zeal. How about including VIPs, eh?
Posted by Kena Shree at 10:41:00