For the last one decade, like dedicated patriots of the country, this year again we chased the newspaper’s international section to follow the fancy dresses Aishwarya Rai, Sonam Kapoor or Mallika Sherawat flaunted at the mighty 69th Cannes’ red carpet. Though we may or may not have a minuscule idea of fashion trending around the globe but opinionated that we are, we didn't let go of a single opportunity to discuss, praise and criticize the dressing sense of our Bollywood ladies at Cannes.

So much that conversations on Cannes Film Festival has almost begun to sound as drab and boring as the ensembles and make-ups of celebrities, barring a few. 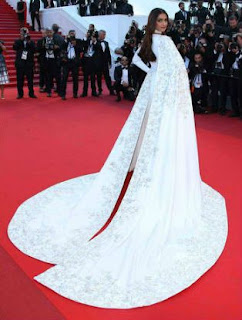 [Picture courtesy: The Indian Express newspaper]
Recently when Sonam Kapoor wore a white gown by Ralph and Russo making the fashion analysts gawky with praise, somewhere a geeky scientist may have sat wondering how interesting a mopping invention it could have otherwise made? If Sonam was to walk around in my apartment corridors just once in a day wearing the mop, she’d have sent the entire team of sweepers for a ride. Alas! The pretty mopping device in white turned out to be a one-time wonder for cleaning up just the Red Carpet.

Suddenly, we saw entire Twitterati going crazy with amazing analogies. From dosa, to rumali roti, to waking up from bed with the bedsheet wrapped around, to  milk spilled on the carpet, her dress kept social media amusingly busy for days. As Sonam and her bandwagon heroines with flowing attires attended to Swachh Cannes campaign, I leave you to figure out how these ladies must have used rest rooms to relieve themselves? 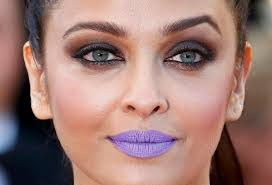 [Picture courtesy: The Indian Express newspaper]
Meanwhile, our forever favourite Aishwarya Rai Bachchan once again grabbed the eye balls with her purple lipstick leaving us to wonder what breakfast was she served at the Cannes – maybe, a plateful of jamun or an overdose of black currant ice cream? Or maybe, she mistook her daughter’s colour palette for a lip tint? Or maybe, the fan inside her couldn’t resist trying out Japanese purple lipstick Joey used in the classic scene from one of Friends episodes? Some even believed she may have got kissed by a smurf a night before!!! Whatever the reason be, our queen of all things nice and beautiful, with her cool looks managed to get the nation’s attention distracted from summer’s soaring temperature yet again. 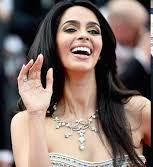 [Picture courtesy: The Indian Express newspaper]
Somewhere in the hullaballoo of fashion madness, emerged a face that we’d almost forgotten to bits. Mallika Sherawat! Blue, white, plain, bare, bold or wear whatever, the nation wants to know her secret hideout for last one year? Without any single decent movie in her kitty or a fashion brand to brag about, she must be a superwoman to have cracked a meaty deal landing her to the prestigious glitterati of the Cannes.

And who wouldn’t? Isn’t Cannes the hottest selling cupcake for celebrities who wants to show their inevitable presence in the fashion world at a time when all eyes across the globe is set upon it? Deals, endorsements, connections and publicity are just bonuses in addition to a splendidly paid French vacation, near picturesque beaches, restaurants, cafés and boutiques of the Riviera.

Besides, everything that Cannes Red Carpet has to offer is little compared to the mystery and cheesy gossips that go behind making ones appearance at the red carpet become a subject of everyone’s talk for long time. When “Hush, hush, the girl is back!” is so worth the Cannes, why even think of the Can-nots!!
Posted by Kena Shree at 11:17:00