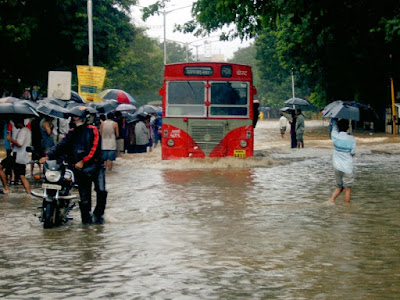 There were times when thinking of monsoon brought before us imagery of joy. Of dark clouds overshadowing the sky, intermittent break of thunder claps and benevolent downpour wetting not only the land underneath, but also soaking us deep within for relief from fierce summer. One couldn’t resist from running into the rains to get drenched from head to toe and never missed opportunities to ditch boring raincoats or umbrellas.
As young girls on bicycles commuting to school under heavy monsoon downpours, we laughed at the disappointed faces of people trapped inside cars, buses or under shades, torn between the longing to get wet in rain and preventing their expensive ensembles from getting color washed. Those days, when deliberately jumping into puddles of water on roadsides, making paper boats, taking a rain shower or watching every green leaf swirl with joy, ran synonymous with a day of bountiful monsoon.
The neighboring muddy field suddenly got transformed into a football court, with boys of all age, sorts and sizes displaying their machismo while playing a sport which looked absolutely picture perfect in rain. Little children ran around the field’s periphery, chasing frogs and imitating their hop, while their concerned parents kept calling out for them to return home.
However, that was years ago.
Of late, the imagery of Monsoon has slightly changed.
One gets to know that rains have arrived in neighboring cities only once the social media timeline begins to get flooded with messages of traffic jams. Photos of hapless office goers commuting to their workplace in two hours for a distance they usually cover in twenty minutes, begins to do rounds on facebook. Angry emojis, distressed pictures of people caught in ruthless jamming of vehicles and even videos of verbal spats arising in a traffic going berserk, conveniently replaces happy memoirs of a rainy day.
In a place like Delhi which makes headlines for being eleventh most polluted city in the world, monsoon comes like an impending horror. A little drizzle and the half patched roads and pot holes at every second road turn, wait to swell into mini lakes. What looks like a small and neat puddle to splash into, might actually be a deep manhole that may gulp down an entire human body into city’s sewer drainage running into Yamuna.
One no longer drives to office but river rafts the vehicle through flooding roads. Obviously, the walk from parking to the building is also no less than swimming through a kiddie pool. While the hygiene conscious or high on maintenance colleagues of mine make faces of wrath at plight of dirty water around, the adventurous ones take to the game of filming garbage floating around and click ruthless pictures of the filth. Sharing on social media, however, would be an option contingent on the benevolence of the network provider, who most likely would have taken a day off on the occasion of rainy day.
One midnight some years ago, I not only got stranded in office for six hours but also lost connection with my family who finally swam their way through dark streets to rescue me.
I’ve come to believe that if there’s anything that can make life messier in an unmanageable monsoon, it is poor mobile connectivity.
Just in case it rains torrentially for over 24 hours, consider taking a boat ride in place of vehicles, local trains or metros to prevent getting marooned at one place. Besides, it’ll also give a feeling of riding a Gondola in Venice! How interesting is that! Drop the idea of taking a bath at home and instead, enjoy a natural waterfall under drainage pipes from buildings. This also encourages water conservation. How about snorkeling for goodies that got drowned in deep floods or roping in your friends to play Waboba in office?!
Disappointed with the rains, are you? Not everyone is. The few species that really make merry of the season are tiny monsters of Darwin who know how to ‘survive as the fittest’ in rainy froth and compost, littering in open streets – Mosquitoes, moths, bugs, viruses and flies!
Sometimes I wonder, why do we even call it raining ‘cats and dogs’ when it actually rains ‘mosquitoes and flies’ in monsoon?
Nevertheless, if there is anything that could bring a rainy day to a perfect closure, it is Single Malt or chilled Scotch, flavoured in liqueur aroma. If that doesn’t work, try our desi cup of hot ginger tea with some steaming homemade onion pakoras. A perfect panacea for relief from headache of traffic jams and fatigue of water sports we have had throughout the day. Thankfully, some nice things about Monsoon never change!
Posted by Kena Shree at 11:03:00