Tilismi Lota: A quick review of the comedy play

What is it? A comedy play put up by a talented group of rising theatre stars from Lucknow.

Sparkle Meter :-
(I'd have given them a 8/10, to be honest. But they earn an extra point for the huge risk taken to stage a comedy play in Awadhi and how!)

In a long, long while comes a play which is scripted totally in the local, colloquial dialect. This one is a local rendition of Awadhi. It is a neat, sweet comedy, packed with musical notes, stellar performances and so much laughter that it will get you rolling on the floor.

If ‘Gangs of Wasseypur’ would ever be put up on stage as a comedy of errors, it would be this, with each character of the play etching for the viewer an unforgettable image.

In a village called Ruknapur, Punai and Machetu are best friends who want to become richer the short-cut way. They’re both hopelessly useless, unhygienic and crass, yet come across as sweet and kind human beings. Jugadhu Pradhan is a criminal from the village, contesting election for the post of Pradhan. His power, not only muscle but also filthy money, helps him tame the entire village out of fear. Machetu mocks God night after night with satirical (and musical) prayers until one fine night Lord Krishna himself appears before him to grant a wish. Machetu is blessed with a ‘Tilismi Lota’ that would change his life forever after. What follows next is how Punai and Machetu get back at Jugadhu Pradhan contesting against him in the elections, how Machetu’s love story with Pradhan’s only daughter grows, how Tilismi Lota changes his luck and how multiple plots get interwoven in a common thread that leave them with a lesson they’ll remember a lifetime.

What Is Good About The Play?

1. Awadhi Language
Not often does one get to watch a play scripted totally in a local dialect, like this one which is partially in Awadhi and partially in Allahabadi. Quite often, the directors are sceptical running the risk of limited viewership or the plot isn’t powerful enough to hold the play in local language for a wider audience. Tilismi Lota, fortunately, is a blend of both elements. It’s a must watch for every Uttar Pradeshi. And those who are ‘Gangs of Wasseypur’ fans would die for it.

2. Acting Prowess
Remarkable performances by the cast, especially, actors playing Machetu, Punai and Jugadhu. They leave behind unforgettable characters that stay with you for long.

3. Comedy Timing
None of the funny liners or sarcasms fall flat. Actors pick up dialogues spot on and emphasise with just the right diction. Even the Bollywood songs that have been choreographed have hilarious dance moves, particularly typical ‘baraati dance’ that leave audience laughing with tears.

What Is Not So Good About The Play?

1. Slangs and Cuss Words
Although used in undertones and in limited scope, there certainly are portions in the play where local slangs and cuss words have been unapologetically used. It does not hurt the ears though. You may want to be cautious with taking little children along.

2. The Opening
The play does not have a powerful opening which misses making a connection with the audience right away. It is with Jugadhu’s first appearance on stage that a strong hook with the plot is established.

3. Poor promotion
Despite a powerful performance prepared with much hardwork and diligence, not much has been done for the promotion of the play. Posters, invites, banners and flyers are not eye-catching enough. The only promotion play gets is by word of mouth. But then, I’m sure we understand how difficult it is to build a brand with lack of sufficient resources for budding theatre artists, don’t we? 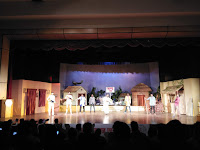 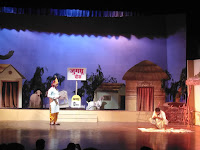 Tickets :-
Rs. 200 for adults and Rs. 100 for children (The one which we watched had tickets sold out at these rates for a full house. However, there are passes available for sponsored shows also).